Posted on January 7, 2016 by Kimberly Girard 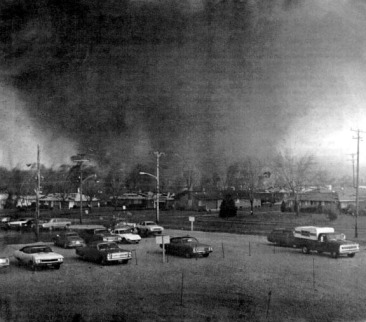 The day after Christmas we drove to Texas to visit family. In the last hour of the drive, our phone sirens went off several times, telling us to take shelter NOW from tornadoes that would soon wreak havoc there.

We didn’t know where the tornados were—the radio and the phones were little help; they don’t know which path a tornado will take. We didn’t know the area well enough to find shelter, so we kept on, driving into the thickest part of the storm. We could barely see the lanes to stay in them, and just as we decided where to take shelter, we found ourselves unintentionally on a high overpass exit ramp.

But that wrong turn, which took us to the highest possible point of the road—seemingly the most dangerous place at the time—led us straight into a sturdy tunnel as the storm passed over us. And as we waited in the tunnel, with at least twenty other cars, we realized that the Lord led, or more accurately, pulled, us there to safety. Neither we nor the weather services knew a safe place, but he did. He is the only safe place.

I generally think of God’s guidance as a clear path I can deliberately follow, but that night, his guidance looked like a wrong turn. We had other, seemingly better and safer, plans, but he knew that at the bottom of the treacherous-feeling overpass there was a sturdy tunnel, waiting to shelter us and to remind us that he alone is our living shelter from every storm—he is still Emmanuel, God with us.